Reminding everyone about the big 60th Birthday Bash on Oct 17 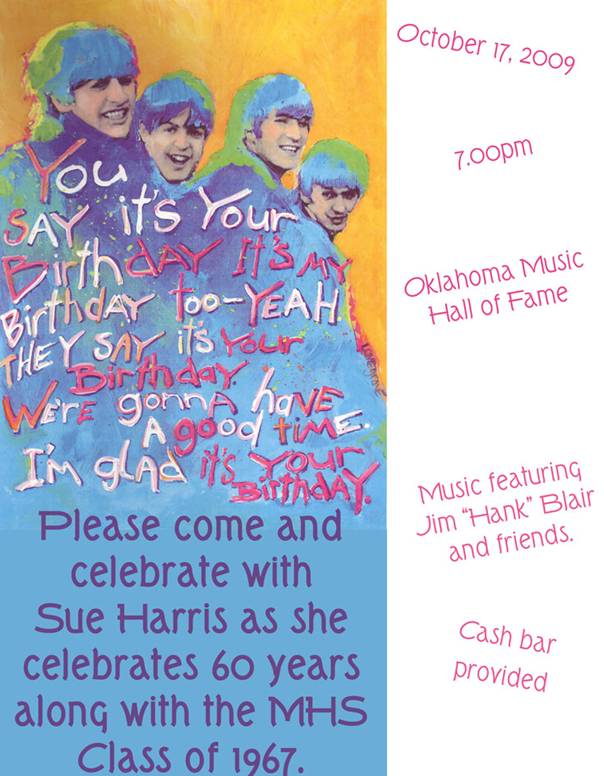 Hello Classmates,
Reminding everyone about the big 60th Birthday Bash on Oct 17, (see attached). Not sending out postcards to those that don't have email anyone, so pass the word on the party. If you know someone with an email address not on the list, please forward it to me. Several new ones on the list since the last email.

Hope you can make it to the party, Jim Blair's band is… Continue

Gary Dale Arnold GARY DALE ARNOLD, age 60, died Tuesday, the 8th of September at Odyssey House in Conroe, Texas after a lengthy illness.
He was born February 28, 1949 in Muskogee, Oklahoma to Calvin and Nakita Arnold as the youngest of 3 brothers and a sister. Gary received his baccalaureate and masters of science degree from Oklahoma State University.
He never lost his love for his beloved Cowboys. Gary worked for Halliburton for 26 years… Continue

Trying to keep up with classmates, for our next reunion (45 yr). Need good mailing &/or email addresses for these lost souls, if we can get them.

Found the girl on the milkcarton!

Hey! I have been hiding out down here in Texas (Arlington) for the last twenty years! Loved the milkcarton picture!

Was it really 40 years ago today that the astronauts walked on the moon? Where were you and what were you doing when this hit the news?

Where in old Central were you when the storage room in the band room caught fire?

I was on fourth floor - in Mr. Rivers' Geometry class with a bunch of sophomores

Anyone got a story about the jiminy cricket morality pieces they used to show us in grade school and at AR when we would have some kind of assembly in the auditorium? I guess today we would call them videos - but I hesitated to use that term in reference to the retro moment.

Check out the Live Traffic Feed at the Bottom of Page..

Added by Mike Simpson on June 28, 2009 at 2:01pm
Admin OptionsFeature Edit Note Delete note Where in the world are you, check it out at the bottom of the page. Nice add on to blogs....

Next Class of 67 event

We had a great time on Saturday, it was good to see everyone & we missed those that weren't able to be there. There were 36 of us this time, a little larger group each time.

Sue Staggs Harris has invited everyone to her 60th birthday party on Oct 17 at Oklahoma Music Hall of Fame (its air conditioned now!). So mark your calendars for our October 17

Anyone interested in "coming home?" Seems that Oklahoma is ready to welcome people home. Check out this website:

Johnny's in the basement
Mixing up the medicine
I'm on the pavement
Thinking about the government
The man in the trench coat
Badge out, laid off
Says he's got a bad cough
Wants to get it paid off
Look out kid
It's somethin' you did
God knows when
But you're doin' it again
You better duck down the alley way
Lookin' for a new friend
The man in the coon-skin cap
In the big… Continue