CHS Classs of 1967 has lost another class mate, John Earl Holden. Attached is a paid obituary in the Muskogee Phoenix this morning Sunday April 18. Susie Lawrence 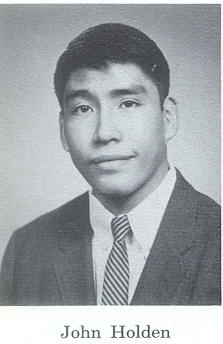 John Holden, of Albuquerque, beloved husband, father, grandfather and brother passed away from his life of February 20, 2010. John was born on May 3, 1949 in Tahlequah Ok to Johnson and Anna Faye (Glory) Holden. On February 26 a memorial service was
held in Albuquerque.


John attended Muskogee High School, where he excelled in academics and sports. He was
the Indian athlete who as a freshman was a 3 sport letterman in football,
basketball and baseball. His unrelenting love of sports lasted his lifetime,
John also became a body builder, was an avid Denver Bronco fan and fiercely
loyal to his Oklahoma Sooner’s. He
attended Northeastern
University receiving a
degree in Business Administration (Economics).
He assisted various tribes throughout Indian Country in acquiring funds
for the displaced and disadvantaged, worked in education and nearly twenty years
for tribal housing in Arizona and New Mexico.

Cremation has taken place and a funeral service will be held at 11am on Friday April 23 at the D.D. Etchieson Indian
Methodist Church
in Tahlequah located at 412 W. Seneca.
Rev Pat Freeman will direct the services. Lunch will follow at the church. Immediately after lunch, burial will take
place at Tahlequah
City Cemetery
with a brief graveside service where his ashes will be placed in his mother’s
grave site.